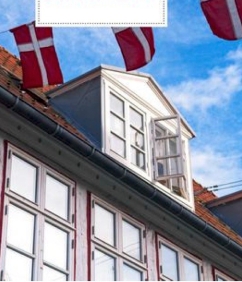 “Dear Danes, have you gone mad? Or have your politicians lost their minds?

By Thomas Borchert, foreign correspondent living in Copenhagen and on Falster

As a long term guest in your country, I hate to be impolite. For my compatriots south of the border I have even written a User’s Guide to Denmark (Gebrauchsanweisung für Dänemark), and it is full of praise. After 35 good years here as a resident foreigner I declare for example in a chapter on the capital city: “I am certain that you, Copenhagen, have helped me to a gentler and more cheerful outlook on life, for which many thanks.” The sentence should have been addressed to the whole country, because that’s how it feels.

Nevertheless, indeed precisely against this background, I must now ask: “Have you gone mad?” Or have your politicians lost their minds? And how long will you put up with it? At the same time, I wonder whether I need entirely new glasses.

At this very moment there is a discussion between local mayors and a government minister as to whether a local authority must pay a fine if the mayor does not insist on a handshake from every single new citizen at an introductory welcome ceremony. The minister for aliens and integration wants to keep firm control of the ceremonies. It’s the craziest idea since Monty Python’s Ministry for Silly Walks. Like a crescendo after the really unbeatably bonkers central idea: that the just-acquired citizenship should be taken away from each and every citizen who does not shake the state’s representative by the hand.

To hold people’s attention, politicians have to think up one crazy trick after the other, each more radical and potty than the last.

I have myself prepared to apply for (double) citizenship. I have twice taken the Life in Denmark test and once the language test. I had to go through the Life in Denmark test twice, because the minister for us aliens and our integration found the first one too easy and declared it invalid. In the test the following year, citizenship depended partly on whether you had put your cross in the right place for the question on whether Carl Nielsen was born in 1865, 1870 or 1892.

Even though I passed test number two, I have not yet sent in my application. Time after time, some brand-new, barmy political whim or other makes me think: “Perhaps the train will leave without me after all.”

One day it’s civil war refugees being body-searched for jewellery on arrival in the country. Once that proposal is forgotten, astronomically high charges are introduced for interpreters at doctors’ surgeries and hospitals. All the experts roll their eyes: utterly unrealistic. Then it’s goodbye to equality before the law, with double penalties for crimes committed in housing estates already branded as “ghettos”, where many immigrants live. Etcetera. Etcetera. Etcetera.

And then there’s the prospect of that handshake. Until now, a national welcome ceremony has been held every year at the Christiansborg parliament building for all newly proclaimed citizens. It’s the chairperson of parliament who sends out the invitations. Her name is Pia Kjærsgaard.

In 1994 she came out with a celebrated and notorious welcome, which one as a “foreigner” with three children does not forget: “Foreigners breed like rabbits.” With that sentence in her luggage – which as far as I know she has never apologized for – she now extends her hand as the representative of the state and all its citizens. If we don’t take the hand, we lose citizenship. This is so insane that may be I should really put it to the test. I would indeed gladly give Mrs Kjærsgaard my hand. But it feels surreal to give a legally commanded handshake as if it were a rite of submission.

The fact that I hesitate to send in my application is also a problem of communication. “Come off it!” growl friends in my first homeland, when I tell them about the forced handshake. “You’re exaggerating, the people there can’t be that crazy. Such friendly people with all that hygge, and one of the world’s happiest nations?”

It’s even worse. As a journalist I live off my credibility. In newspapers over the last two decades I have reported accurately in my mother tongue how the Danish People’s Party, step by step, election after election, has conquered the political landscape. To the point where virtually all the others want to be like them and must now think up their own insane proposals to measure up to and preferably outdo their example. As a correspondent I’ve had to serve up the same story for my compatriots over and over again – with various adjustments, depending on the latest, constantly escalating, crazy ideas.

When the foreign ministry celebrated the government’s crackdown number 50 with layer cake, I described the incomprehensible phenomenon (like other gaping media folk the world over) and thought to myself: “OK, enough is enough!” The quota for that type of story was full up. Otherwise it could result in readers and editors starting to think their Nordic correspondent was unreliable.

That’s why no one has yet been able to read a line in the Frankfurter Rundschau about the integration ministry boasting on its official home page that it’s come up with 98 “crackdowns in the aliens area”. As if the figure is a scoop, a value in itself. Who in his right senses would believe me if I reported how the government and its powerful supporting party, plus certain media, can hardly bear to wait for the great jubilee orgy when the figure of 100 is reached, preferably as the sparkling prelude to yet another election on “the foreigner theme”. It sounds just too crazy.

On the same grounds, I have so far resisted writing about the border fence which is to curb the invasion of wild boar from the south. For then I would also have to report that the Danish People’s Party in all seriousness proclaims: Let’s straightaway build the fence higher than a miserable one and a half metres, so it can also keep out the refugees. It’s too crazy, and as I said, I also have to think of my good name and reputation.

In my mother tongue there is a rhyme: “Ist der Ruf erst ruiniert, lebt es sich ganz ungeniert.” Once your reputation is gone, you can live unembarrassed do just what you like. That’s apparently how far things have gone with these politicians. Added to which, to hold attention they must think up one insane trick after the other, always more radical and crazy than the last. It seems to be an inbuilt mechanism.

As I write these lines I have received a report in my intray that the costs for the new local authority handshake ceremonies come to DKr 2,600 (350 Euro) per new citizen, and the citizens must pay that amount themselves. From January 1 the application for citizenship will now cost DKr 3,800 instead of the earlier DKr 1,200. Has anyone heard the like? Yes, in my homeland – but that’s another story.

The latest is that the legal spokesperson for the Social Democrats has proposed that the hammer should fall on asylum seekers the third time they travel on public transport without a ticket. “It should result in the asylum seeker being refused asylum,” one reads in Ekstra Bladet, and thinks: Despite everything, this is a record low. That the record holder dissociated herself from this remark after a critical newspaper article is a well-known part of this political game. Now we’re just waiting for the next proposal that will beat the record.

Finally, the strangest thing about all this is that in everyday life, meeting all kinds of people, I don’t come across this constantly rising spiral of madness. So in the next edition of my User’s Guide to Denmark I will retain the sentence: “I am certain that you, Copenhagen, have helped me to a gentler and more cheerful outlook on life, for which many thanks.”

Perhaps though with an addition: “But dear friends in this country, why do you let politicians in their hunt for votes destroy this magnificent treasure?”